Bloodfever is book two in the Fever series written by Karen Marie Moning – I strongly suggest you start reading this series with DarkFever, book 1 in this series as it starts where it has been left off in book 1.

I used to be your everyday, average girl but all that changed
one night in Dublin, when I saw my first Fae, and got dragged
into a world of deadly immortals and ancient secrets…

In her fight to stay alive, Mac must find the Sinsar Dubh—a million year old book of deadly black magic, which holds the key to power over both the worlds of Fae and Man. Pursued by assassins, surrounded by people she knows she can’t trust, Mac finds herself torn between two dangerous and powerful men, V’lane, a lethal Fae prince and the mysterious Jericho Barrons.

For millennia the shadowy realm of the Fae court has coexisted with that of humans. Now the walls between the two are coming down and Mac is the only thing that stands between them.
END_OF_DOCUMENT_TOKEN_TO_BE_REPLACED

Well… I’ve just received the following books as a loan as I had asked for more recommendations of authors and book series. I didn’t expect such a haul! I am thoroughly pleased with this ^_^
This will probably tie me over for a couple of weeks – say a month maybe? But coming out with loads more reviews and book recommendations!

I can’t wait to start reading!! Thank you to a kind friend of mine ^_^

Darkfever is book 1 of the Fever series, or also known as the Chronicles of Mac O’Connor written by Karen Marie Moning.

MacKayla Lane’s life is good. She has great friends, a decent job, and a car that breaks down only every other week or so. In other words, she’s your perfectly ordinary twenty-first-century woman.
Or so she thinks… until something extraordinary happens.
When her sister is murdered, leaving a single clue to her death–a cryptic message on Mac’s cell phone–Mac journeys to Ireland in search of answers. The quest to find her sister’s killer draws her into a shadowy realm where nothing is as it seems, where good and evil wear the same treacherously seductive mask. She is soon faced with an even greater challenge: staying alive long enough to learn how to handle a power she had no idea she possessed–a gift that allows her to see beyond the world of man, into the dangerous realm of the Fae…
As Mac delves deeper into the mystery of her sister’s death, her every move is shadowed by the dark, mysterious Jericho, a man with no past and only mockery for a future. As she begins to close in on the truth, the ruthless V’lane–an alpha Fae who makes sex an addiction for human women–closes in on her. And as the boundary between worlds begins to crumble, Mac’s true mission becomes clear: find the elusive Sinsar Dubh before someone else claims the all-powerful Dark Book–because whoever gets to it first holds nothing less than complete control of the very fabric of both worlds in their hands…

END_OF_DOCUMENT_TOKEN_TO_BE_REPLACED 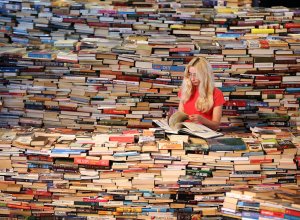 A friend of mine posted this link, 50 signs you’re addicted to reading, on my facebook wall – basically summing up .. well.. me! I really wanted to share this with you. 🙂

I have picked out a top 15 for me as not all of them apply to me… but I also gained some tips out of this post – including ziplocking your Kindle, why haven’t I thought about that before? I probably could make a top 40 – but I want to try to keep it short and simple hehe.

1 – You’re supertired at work because you stayed up way too late reading just one more chapter, and then another. 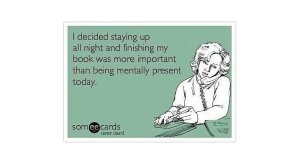 END_OF_DOCUMENT_TOKEN_TO_BE_REPLACED

Archangel’s Kiss is book #2 in the Guild Hunter series written by Nalini Singh – I would recommend to read book #2 Angel’s Blood first as this book starts where it left off in book 1.

Vampire hunter Elena Deveraux wakes from a year-long coma to find herself changed—an angel with wings the colors of midnight and dawn—but her fragile body needs time to heal before she can take flight. Her lover, the stunningly dangerous archangel Raphael, is used to being in control—even when it comes to the woman he considers his own. But Elena has never done well with authority…

They’ve barely begun to understand each other when Raphael receives an invitation to a ball from the archangel Lijuan. To refuse would be a sign of fatal weakness, so Raphael must ready Elena for the flight to Beijing—and to the nightmare that awaits them there. Ancient and without conscience, Lijuan holds a power that lies with the dead. And she has organized the most perfect and most vicious of welcomes for Elena…