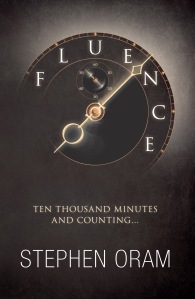 Amber is young and ambitious. Martin is burnt out by years of struggling. She cheats to get what she wants while he barely clings on to what he has. It’s the week before the annual Pay Day when strata positions are decided by the controlling corporations. The social media feed is frenetic with people trying to boost their influence rating while those above the strata and those who’ve opted out pursue their own manipulative goals.

Fluence is a story of aspiration and desperation and of power seen and unseen. It’s a story of control and consequence. It’s the story of the extremes to which Amber and Martin are prepared to go in these last ten thousand minutes before Pay Day.

Like each and every one of us, my perspective of the world has been affected by many people and experiences: as a teenager I was heavily influenced by the ethos of punk; in my early twenties I embraced the squatter scene and then joined a religious cult, briefly; I did some computer stuff in what became London’s silicon roundabout; and I’m now a civil servant with a gentle attraction to anarchism. I really enjoy taking a sideways look at our world and thinking, “what if,” and then writing about it through speculative fiction.